It’s hard to find a tourist who has been to Barcelona but hasn’t walked through the streets and squares of the mythical Gothic Quarter (in catalan and officially Barri Gòtic). Situated in what has been the heart of the city centre since Roman times, it’s one of the areas with the greatest number of places of cultural and historic interest, and therefore one of the most visited areas of Barcelona.

Discovering the Gothic Quarter of Barcelona

Barcelona was founded in the First Century AD under the name of Barcino, in the same place that the Gothic Quarter occupies nowadays. Therefore, a great part of the district’s charm lies in its 2000 years of history, making it the oldest area of the city. From its origins to the present day, it has been the political centre of the city, as Catalunya’s two most important institutions – Barcelona’s City Hall and the Palau de la Generalitat (the government’s headquarters) – can still be found there, both in the Plaça de Sant Jaume. Fortunately, some Roman remains are still conserved, highlights of which are part of the first of the city’s walls, which you can see next to the cathedral, remains of the foundations in one of the sites of the MUHBA (Barcelona’s History Museum) in Plaça del Rei, some of the Columns of the Temple of Augustus inside the mansion on Carrer Paradís and the Roman necropolis, in the Plaça Vila de Madrid, next to La Rambla.

One of the most important periods for the city, apart from the Roman era, was the Middle Ages, as it was then that much of the current structure of the district took form, through the construction work that was carried out at the time, especially in the Early Middle Ages (approximately between the 11th and 15th centuries). 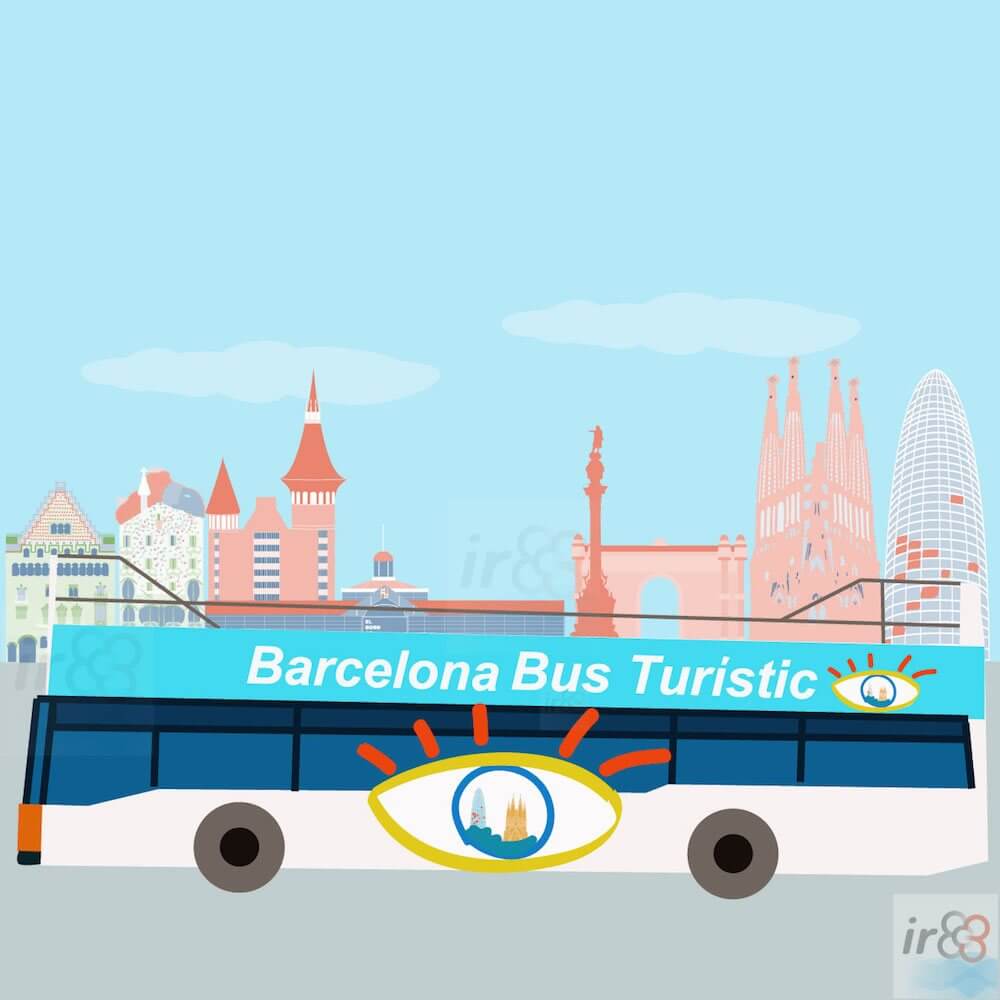 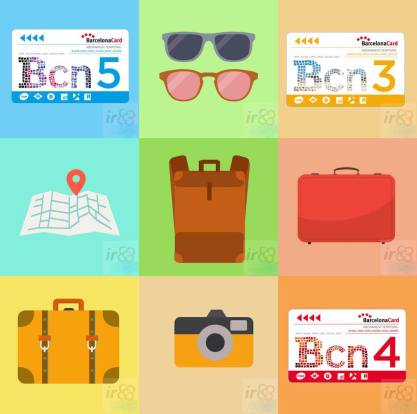 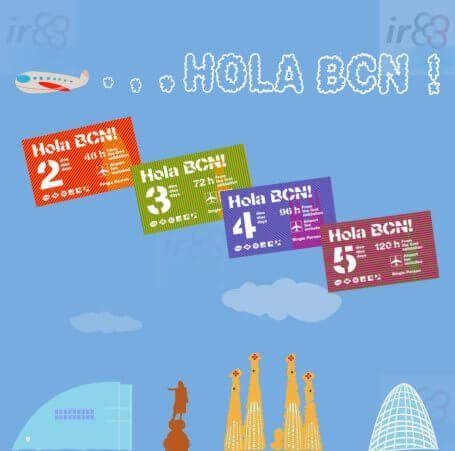 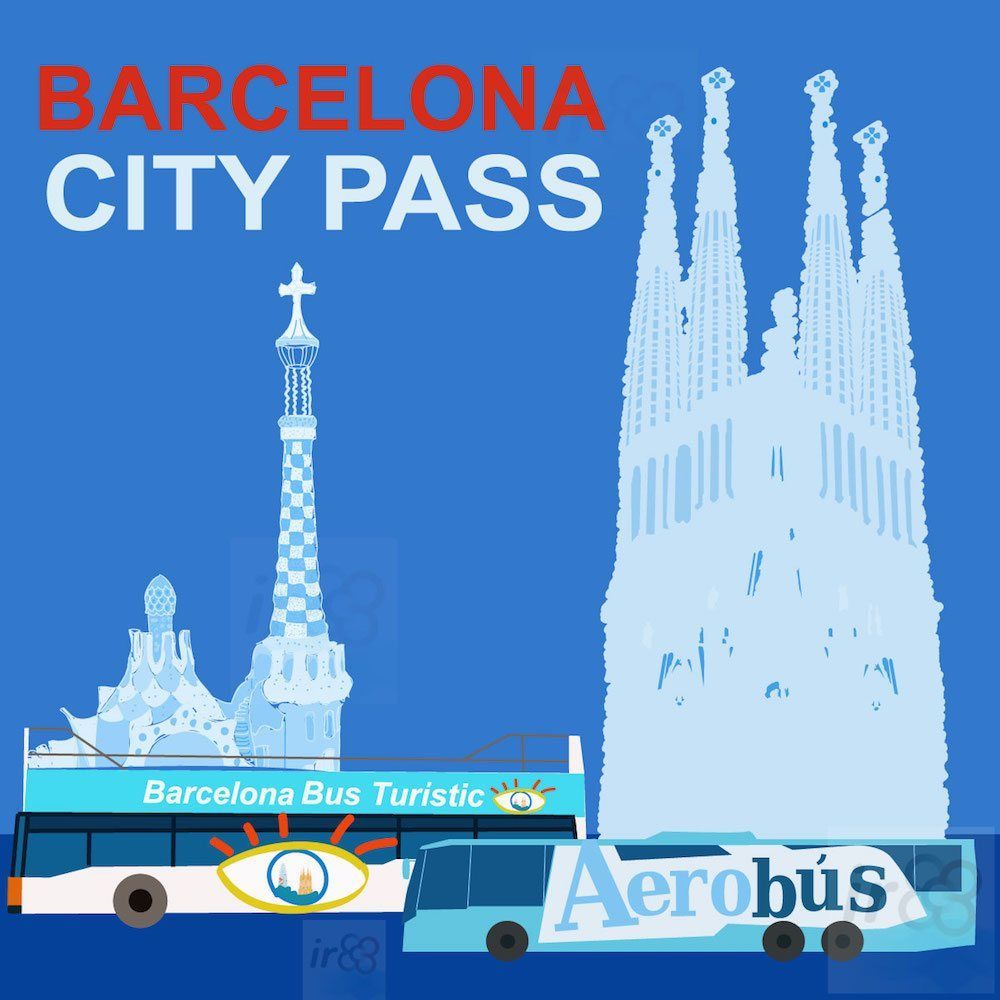 Travel cards
THE TRUE ORIGIN OF THE GOTHIC QUARTER

So the question is, does the Gothic Quarter truly exist? Of course the answer is yes, but with some important things to note, because despite the historical streets that still map the same routes as they did centuries ago, and the existence of original gothic mansions and buildings in the district, there’s no doubt that so many other places that are now captured as gothic aren’t as original as they might seem. It was during the first half of the 20th century, with the exception of just a few cases (for example that of the façade of Barcelona’s Cathedral, 1887-1912) when, with a clear and planned intention of the ‘medievalization’ of the area that was known as the Barri de la Catedral (the Cathedral neighbourhood), the district was turned into an exponent of Catalan gothic architecture.

HOW WAS IT CARRIED OUT?

We hope that the artificialness, or rather modernity, of part of the Gothic Quarter doesn’t make you lose an ounce of fascination for this magical area of Barcelona. This fact shouldn’t hide the medieval spirit that the district emanates, nor should you forget that the vast majority of its buildings, whether Roman or Gothic, are authentic and have generally only undergone small renovations or facelifts. We’re convinced that when you first visit the Gothic Quarter, you’ll love it as much as we do.

The Jewish community once had a great presence in Barcelona, especially between the 11th and 14th centuries, but it was towards the end of this period that tension with the rest of the city reached a climax, resulting in the killing of around 200 Jews on 5th August 1391. This turning point marked the start of a gradual decline in the Jewish population, which came to a head in 1492, when the Catholic monarchs ordered the expulsion of all Jews from Spain.

QR GÒTIC
Thanks to the QR Gòtic project, through which various QR codes have been displayed in shop windows and façades of businesses in the Jewish Quarter and the rest of the Gothic Quarter, with the help of a smartphone and QR reader it’s possible to find out more information about the building itself, as well as the history of the area in which you are standing.

Nowadays El Call is one of the most charming areas, not just of the Gothic Quarter but also of the whole of Barcelona. The fascination with the Jewish Quarter by tourists and locals alike is largely due to the fact that its original structure has remained almost intact. In addition to this, it’s also still possible to see some remains from the late medieval period, such as carvings in the façades of some of the houses, and of course the true symbol of the era, Barcelona’s Synagogue, which was only re-discovered in 1995. 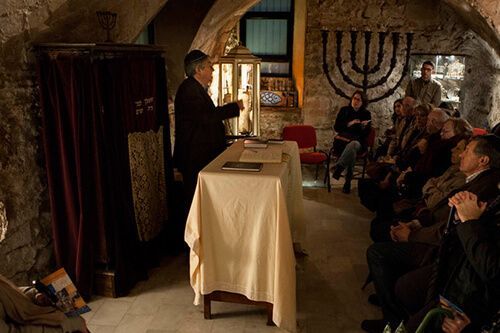 Jewish Quarter tour and dinner at the Palau Requesens

In order to discover and get to know the hidden corners in the Gothic Quarter, many of which are brought to life by the presence of buskers and street artists, we really recommend that you go for a wander and lose yourselves in the district’s streets and squares. You could do this accompanied by tourist guides, but sometimes you can even discover more when you venture out on your own, especially in areas such as this, which have so much historical and cultural interest.

Guided tours of the Gothic Quarter

If you prefer, another way to deepen your knowledge of the history and details that are often missed when you first visit the area is to go on one of the many guided tours, which are carried out in various languages and organised by many companies and institutions. 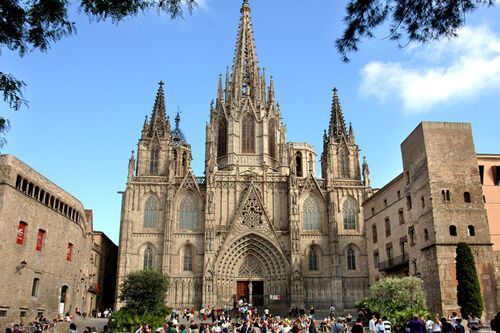 At irBarcelona, through a partnership with the best official guides of Barcelona and Catalonia, we can offer you every type of guided tour, managing a route through the Gothic Quarter or a tour through the area that you may be interested in. You can take the custom tour in English, including sights that may interest you and some other places that the guide can suggest to you. We also offer custom routes in English to other areas in the city.

If you want further information, don’t hesitate to contact us (with no obligation).

It’s becoming more and more fashionable to discover Barcelona by bike, which allows you to see the city’s streets at a slightly faster but still leisurely pace, whilst still being able to enjoy the charms they have to offer. There are therefore a growing number of companies that offer bicycle hire, many of which also organise excursions and guided tours to the most popular areas of the city.

The Gothic Quarter is home to many museums, some of which have some very strangely themed exhibitions, such as the picturesque Frederic Marès Museum. As well as the interest in the exhibitions housed within the museum, the building itself often adds to the attraction, such is the case with the ‘Hash Marihuana Cáñamo & Hemp Museum’ in the Palau Mornau, or the ‘Museu Diocesà’- The Gaudí Exhibition Center within the Pia Almoina building, which is in itself of great historical relevance.

Buildings, mansions and other monuments

The streets of the Gothic Quarter are rich with mansions and buildings of historical interest. It’s true that some of them have undergone some renovation work, or have even been moved brick by brick from other areas of the city, but this doesn’t take away any of the interest in the buildings that you can see just by walking through the area. To this day, many of them are still privately owned so it’s not possible to visit them, but some of them house museums which allow them to be visited by the general public, and some are the headquarters of public institutions, which can be visited on certain days of the year.

Columns of the Temple of Augustus

The churches throughout the Gothic Quarter form an essential part of the character of the district, whether they are the most famous and ornate or those that aren’t so well-known but are still of historical importance. You can visit them all, in some cases free of charge, but sometimes by paying a small fee. Some are open all day but some have limited opening hours, so it’s best to check in advance.

It’s possible to go up to the roof of Barcelona’s Cathedral, as is also the case with the Santa Maria del Pi church’s bell tower. Those who choose to do this will enjoy some really privileged views of the Gothic Quarter and of much of the city’s skyline.

Shops selling the most well known brands share the stage with small traditional businesses that have been around for centuries, and although some of these have closed over the years for a variety of reasons, some continue to thrive today in spite of the huge amount of competition in the city. It’s these small businesses, along with the district’s historical streets, squares and buildings, which really give the Gothic Quarter a unique medieval appearance.

MARKETS AND FAIRS
The various outdoor markets that can be found throughout the Gothic Quarter deserve a special mention. Some of them are set up weekly, some every fortnight, and in some cases just at weekends or on a more sporadic basis.

In every cultural holiday, you’re bound to need some time to relax, and to make the most of this wonderful area of Barcelona we recommend taking time to rest and have a drink in one of its many bars. If you’re in need of lunch or dinner, the restaurants hidden away in the Gothic Quarter’s narrow streets and squares are the perfect place to stop and unwind.

To have a drink

THE ‘GRANGES’ ON CARRER PETRITXOL

It’s unforgivable to come to Barcelona without stopping off at one of the two iconic ‘granges’ or chocolate cafés on Carrer Petritxol, to taste one of their famous gastronomic delicacies. In winter, when it’s coldest outside, the granges become busier, both with tourists and with the city’s locals, all eager to warm up with a luxurious hot chocolate and a freshly baked pastry.

Hotels and other recommended accommodation

The Gothic Quarter is one of the best areas of Barcelona in which to stay, especially if you’re only going to be in the city for a few days, because you’ll be able to visit many of the sights without having to waste time travelling. When you do have to catch public transport you’ll have a choice of options, as you’ll be so central and well connected with the rest of the city by metro and bus. Below we have given you a list of some of the accommodation options that we recommend (hotels, hostels, apartments, etc.), taking into account their value for money and the level of service they offer, as well as the feedback of other tourists who have stayed there. 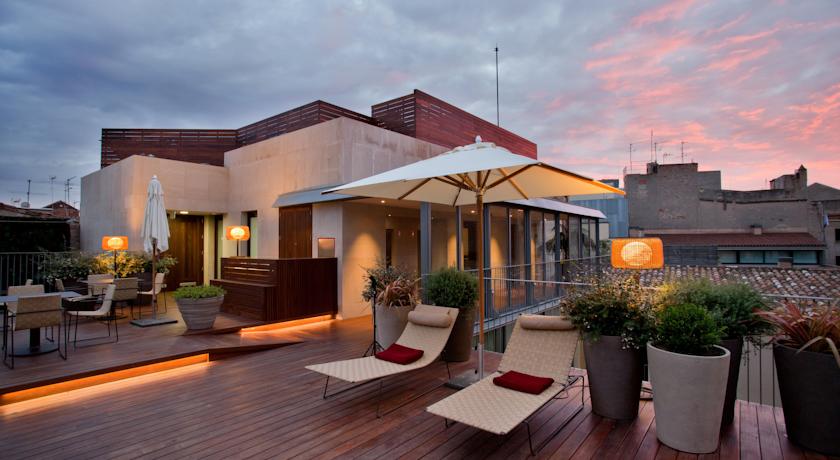 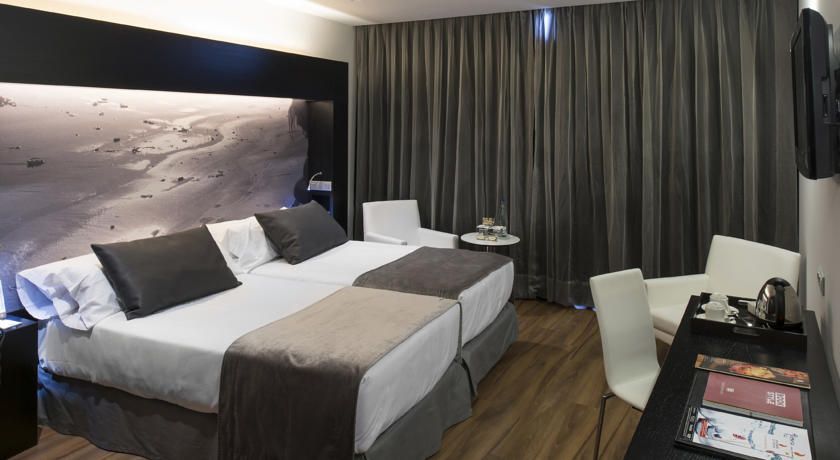 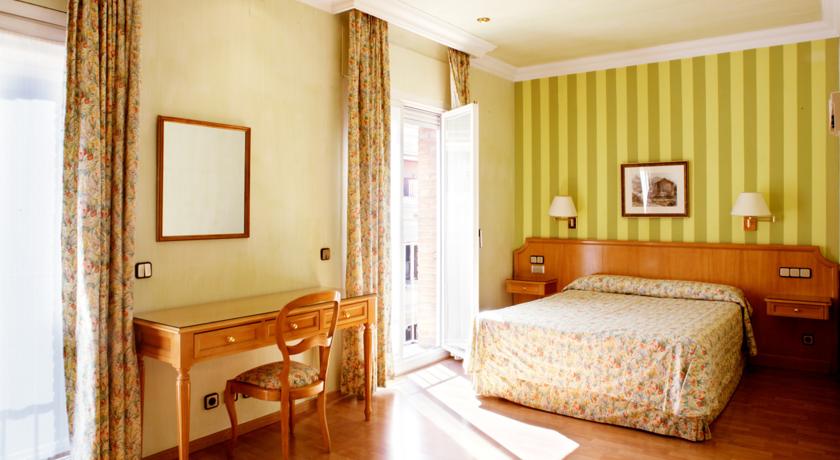 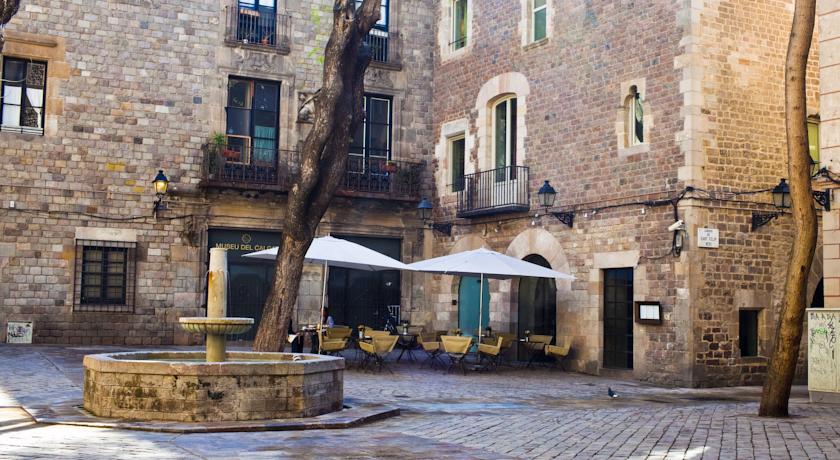 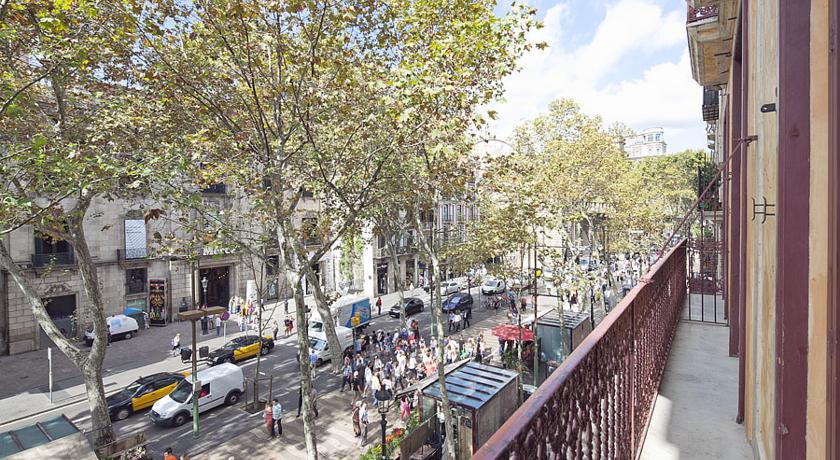 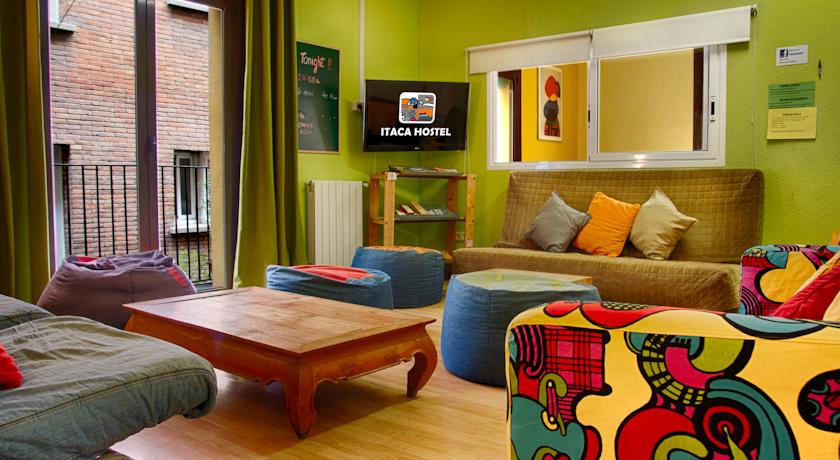 The district’s fiestas and events

As the Gothic Quarter really is the authentic epicentre of Barcelona, it’s not short of fiestas and events, which take place throughout the year, many of which outside in the squares and streets. We have managed to select the six that we think are the most important, and should be an essential part of your visit if you happen to be in the city while they are taking place.

Other areas and districts of Barcelona