Unfortunately, the Basílica de la Mare de Déu de la Mercè, known in English as Basilica of Our Lady of Mercy, is all too often a church that’s neglected by visitors, or at least seen as second-rate to some other churches in the city, even in spite of being located very close to La Rambla and being dedicated to the city’s patron since 1687, the Verge de La Mercè (in english, the Virgin of Mercy).

The Virgin of Mercy

In baroque style, the current Church of La Mercè dates back to 1775. It was constructed by the architect Josep Mas i Dordal and it was built on the foundations of the previous church which originated in the 8th century. On of the most striking elements of the outside of the church is its dome and the image of Our Lady of La Mercè, at the top. These were both added to the original church in 1888.

The image of the Virgin on the dome was destroyed during the Spanish Civil War, but it was replaced many years later with the image that you can see nowadays, a larger replica that was designed by the brothers Llucià and Miquel Oslé. In 1918 the church was consecrated by Pope Benedict XV as a minor basilica, being the second church to gain this title, after Barcelona Cathedral.

You can access the basilica via the entrance on the Plaça de la Mercè. It has a central nave and two laterals, and the most striking feature is the golden baroque altarpiece. One of the benefits of visiting the Basilica de la Mercè is the chance to go up to the first floor, on which there’s a small room containing a few religious objects, and from which you can access the chapel of the Virgin of La Mercè, a sculpture in gothic style from the 16th century, which was the work of the sculptor Pere Moragues. It’s free of charge to go up, and to do so you just need to go up the left side of the nave to the end, where you’ll see a small door leading to the steps which go up to the first floor.

In the Plaça de la Mercè, where the basilica is located, you’ll also see a large building. It’s the former La Mercè convent that became a school, to be turned into the site of the Capitanía General years later, which it has remained until the present day. Another highlight of the square itself is the monumental fountain that’s dedicated to the god Neptune.

Walking from Carrer Ample, if you keep going when you reach the church you’ll see a beautiful side façade, of flamboyant gothic style from the 16th century. It’s actually from the former Church of Sant Miquel (St Michael in English), which used to be in the Plaça de Sant Miquel, near Plaça Sant Jaume. It was carefully taken down and moved to the Basílica de la Mercè in 1870, just before the Church of Sant Miquel was demolished in order to make more room for the city hall’s premises.

We recommend that you walk a few metres up Carrer Carabassa, and when you turn towards the Carrer Ample you’ll see the imposing image of the figure of the Virgin of Mercy on the church’s dome, of which we have included a photo in our gallery. 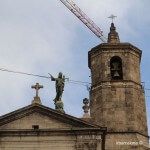 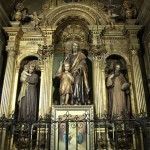 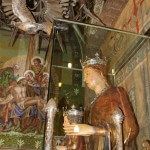 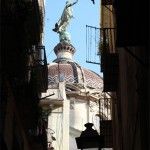 It’s free of charge to enter the basilica.

On foot: close to La Rambla, you’ll be able to arrive on foot if you’re in the area.