For almost all locals in Barcelona, as well as those living in the area around Barcelona, the end of summer does not just mean the arrival of better temperatures and the fact that each day the evenings come a bit sooner, but the end of the summer period is synonymous with the Festa Major de Barcelona, or in other words the La Mercè Festival, Barcelona’s major festival. The official celebration is on the 24th September, but the celebrations last over several days. Specifically, in 2019, the Mercè Festival is from 20th to 24th September.

La Verge de la Mare de Déu de la Mercè, the Virgin of Mercy or Our Lady of Mercy has a basilica dedicated to her in the Gothic Quarter and she has been the patron saint of the city of Barcelona since 1687. This title is shared with the old patron saint of the city, Santa Eulàlia. Since 1871, the festival of La Mercè (24th September) has coincided with the celebrations of Barcelona’s main festival, the ‘Festa Major’.

Often the Mercè festival is referred to as multiple festivals. This is because there are many, varied activities organised over these days during the celebrations that, without a doubt, is definitely the best way to describe Barcelona’s main festival. So, you could say that everyone will find “their own festival”. This is because during these days the main stars of the festival will be live music, with open air concerts of all genres and in different parts of the city, traditions, with human towers and “falcons”, “diables” (devils) with “correfocs” (fire runs), parades, giants and “capgrossos” (large heads) and bestiary. Light and visual shows on the streets and in Ciutadella Park, mapping on Barcelona city hall’s facade (and depending on the year, on other symbolic places of the city) and fireworks, with pyrotechnic shows on Barceloneta beach and the final event, the highly anticipated musical-fireworks display next to the Montjuïc Magic Fountains.

If you wish, you can download the full programme of La Mercè 2019 published on the official website.


La Mercè… is a public holiday?

In the city of Barcelona the 24th of September (Day of La Mercè) is a public holiday. It is a local festival so, in general, the public holiday does not apply to other towns and cities, not even to those next to or close to Barcelona. Having said that, and depending on the calendar, sometimes the cities of Badalona, L’Hospitalet and others, choose to have this day as a public holiday. So, the other days when La Mercè events are celebrated are not public holidays (unless it is a Sunday of course).

Here you will find a summary of the different types of activities that are on offer this year at the 2019 Festa Major of Barcelona. Although many of the activities on offer are similar to the last few years of La Mercè and greatly anticipated each year (fireworks show and the Fire and Light Festival, BAM Festival and other music performances, street art, etc.) the content of them vary a lot, meaning that they attract all the locals in Barcelona and other frequent visitors. In some cases, the description we give on the activities comes with a link so that you can get additional official information (details about the schedule, specific locations and times).

Each year the Mercè festival invites a city to join in the different festival events. In 2019, the guest city will be Beirut (capital of Lebanon) and we are positive that we will enjoy every one of its recreational and cultural proposals.

One of the main stages for La Mercè Festival each year is the Ciutadella Park. In the daytime street artists take centre stage (theatre, music, dance and other skills), many of them aimed at entertaining the little ones. The vast majority of these activities are repeated throughout the day in different areas of the park and with previously scheduled times. As it starts to get dark, light becomes the main star of the show in the park, where you can see mapping projections, performing arts, visual shows where light dominates, etc.

As happens every year, the poster for the Mercè festival is a piece by a prominent or promising designer. In 2019, Barcelona City Council commissioned María Corte to design it, a well-known drawer and illustrator from Barcelona. 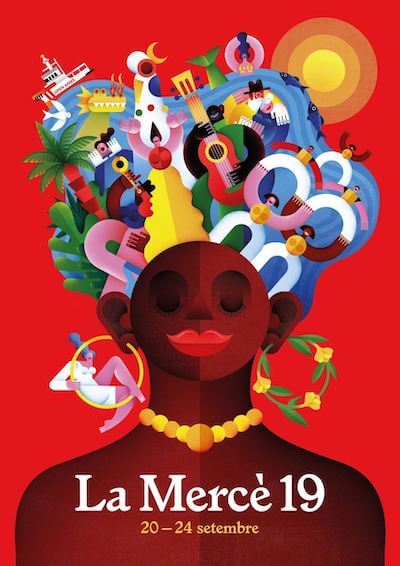 The festival traditions, although classified within the street arts activities, really deserve a special mention. The Giants, the “Capgroços” (large heads), the “Diables” (Devils), the “Castellers” (human towers) and the “Falcons” and the Bestiary of the city fill the streets and squares of Barcelona with life. There are also traditional Sardanes dances and other popular Catalan dances. Although these types of popular traditions are located in various parts of the city, Plaça de Sant Jaume is one of the main sites.

Plaça Sant Jaume, La Rambla, Via Laietana and other locations

Several activities related to the circus arts are included in the MAC Festival (Festival Mercè Arts de Carrer). Despite the fact that its location of Montjuïc Castle is not exactly central, these circus shows manage to attract a large number of people every year, especially families with children, who are the ones who most often enjoy the scheduled activities.

Montjuïc Castle.
To be confirmed
from 12am to 8pm.
+ info: Consult the official programme in PDF (above).

Cursa de La Mercè is one of the most popular fun runs out of all those which are organised throughout the year and one of the sporting activities that has the highest participation. Families and groups of friends wanting to spend a Sunday differently, join athletes running to improve their personal best, all in an event that is both festive and fun. The run does not coincide with other activities during the festival (it is usually organised on a different weekend) as many streets have to be closed off which would affect other activities taking place.

Open doors and free visits to museums and landmarks

Some museums in Barcelona take part in the Mercè festival by scheduling a day of open doors on the 24th of September. Also, some historical buildings and popular monuments in the city open their doors to everyone who is curious to see inside of them.

*The vast majority of places organise a day of open doors, on Sunday 24th September, but others choose to extend the free visit to more days.

One of the most spectacular events in the festival is the air show “La Festa al Cel” (Sky Festival). Although it is linked to the Mercè festival, for a few years it has been organised outside of Barcelona. In 2019, the chosen location is the Lleida – Alguaire Airport.

How to get around during the Festival?

To get around the city during the festival, be it to enjoy an evening concert at the different stages of the BAM Festival, going to see one of the street performances or to the musical-fireworks display, going by public transport is a must. Using public transport is an obligation more than a recommendation because of the huge number of people going to the same place at the same time, as well as various stretches of some of the busiest streets being closed off for security reasons or to enable some of the shows to be held.

Many of the activities mentioned are perfect for children as they enjoy both the air show Festa al Cel and the light shows and fireworks. However, there is also another series of events focused exclusively on children such as storytellers or workshops for children to encourage their imagination.

Despite what we mentioned before, each year La Mercè has its own different characteristics of the regular activities and are usually done each year in the same locations. On the map you can see some of the regular locations of the events of La Mercè.