Magic Fountain of Montjuïc in Barcelona

As well as being one of Barcelona’s most characteristic sights, the Magic Fountain of Montjuïc is also one of Montjuïc’s main tourist attractions. Designed by the Catalan architect Carles Buïgas, it was commissioned to celebrate the International Exhibition of 1929, as were so many of the city’s most emblematic buildings and monuments.

Also simply referred to as ‘Font de Montjuïc’ or ‘Fountain of Montjuïc’, music was added to the light show in the 1980s; this attracted even more tourists and made the spectacle even more impressive. There are a variety of choreographed shows, in which the lights change colour in time to the music, and also in time to the changes in the various effects of the fountains.

The magic fountain shows are something that you really shouldn’t miss out on when you come to Barcelona. Even the locals in Barcelona take time to go to see them when they are in the area. The shows are in the open air and are completely free, so we do recommend that they are well worth a visit.

Travel cards
IMPORTANT These are the official times of the shows, but they are subject to change without notice for logistical reasons (it’s very likely that the show will go ahead on 25th and 26th December and on 1st January, even if they don’t fall on Fridays or Saturdays).

As you will see, on days that the Magic Fountain is operating there are several shows, each lasting 15 minutes, so if the first show that you see isn’t to your taste, you might like to wait for the next one, especially as the music is very varied. Many visitors make an evening of it, often staying for two or three shows.

Leave an expert guide organize your holidays in September

Barcelona’s Montjuïc Magic Fountain is the setting for New Year’s Eve in Barcelona. For this event, and as could not be any other way, the Montjuïc Fountains themselves have a leading role thanks to a show that takes place during this very special night. In addition, another series of proposals are offered (from 9.30pm) and the final show, which culminates with spectacular fireworks, begins a few minutes before midnight (11.30pm – 11.45pm).

We recommend that you go to the Magic Fountain towards the start of the shows as the sun sets, and perhaps take a picnic with drinks to accompany your trip. You can find a good spot to set up nearby, on a bench or steps, if you’re lucky away from the hustle and bustle of the rest of the tourists. The Magic Fountain, with its varied shows at regular intervals, makes a great backdrop, and you’ll hear all the different music. When you’ve finished your meal you could wander past the fountain in order to get a different perspective now that the sky is completely dark. 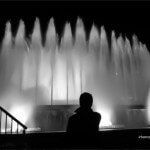 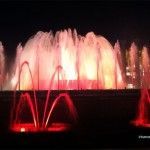 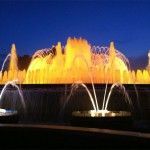 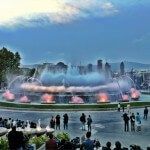 You can see the timetable of shows above.

The Magic Fountain shows are free to attend and you don’t need to book in advance.

By foot: The Magic Fountain is situated at the base of Montjuïc, and it’s possible to walk there from the Poble Sec or Montjuïc areas.