The public holidays calendar in Barcelona has many holidays that are held all over Spain, as well as other dates that are only celebrated in Catalonia, such as the National Day of Catalonia which takes place on 11th September, or in the city of Barcelona, such as its major festival in memory of its patron saint the Virgen of Mercy, and is celebrated every 24th September.

If you are lucky enough to visit the city during one of these public holidays, it is worth getting information on the traditional celebrations, activities and events for some of these holidays.

When organising a trip to Barcelona it is worth knowing the public holidays calendar for the city as sometimes there may be a change in opening times for visits to museums, monuments and tourist and cultural attractions, especially during the Easter week, 1st and 6th January and 25th and 26th December. That’s why we recommend you to take a look at this section before travelling to Barcelona and in case your stay coincides with any of the public holidays in the city, you can think ahead and check the opening times of certain cultural visits that you plan to make, of stores and shops you want to go shopping in, as well as get information on the possible changes for some restaurants and night venues or if there is any change to the public transport service, especially metro and bus.

Leave an expert guide organize your holidays in Barcelona

Although business opening hours in Barcelona has gotten more relaxed over recent years, on most public holidays (including Sundays) the vast majority of stores and businesses are usually closed. For a certain number of days and/or holiday periods, businesses are open, in some cases just in a specific area of Barcelona called the “tourist zone”. However, because of its privileged location in Port Vell the Maremagnum Shopping Centre has certain benefits, it is open during all public holidays, except 25th December. 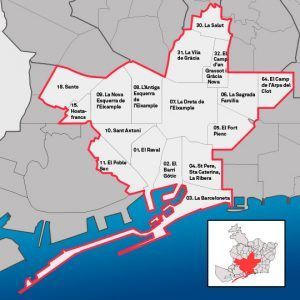 Image property of ajuntament.barcelona.cat
Stores in the “Tourist area” are allowed to open on Sundays from 12pm to 8pm during some periods of the year (2020: from 5th to 24th May and from 1th to 14th October). These are mostly stores located in the Ciutat Vella district (El Raval, El Born-La Ribera, La Barceloneta and the Gothic Quarter) where a large number of stores are usually open on these Sundays. Also, each year stores are allowed to open in all areas of the city on some Sundays and other specific public holidays (2020: 5th and 12th January, 5th July, 15th August, 12th October, 29th November and 6th, 13th, 20th and 27th December), although most stores that choose to open during these public holidays are in the city centre.