Barcelona’s metro (underground / tube / subway), opened in 1924 with one small section of the current Line 3 between Plaça de Catalunya and Lesseps, has continued to develop since, both in terms of the number of stops and indeed the number of lines that serve Barcelona. It is now one of the fastest and most reliable ways of getting across the city.

Now Barcelona’s metro lines, which are run by the TMB, cover the vast majority of the city, which means that they are used by both residents of Barcelona and tourists visiting the city.

Where to buy Metro tickets?

There are many places where you can buy the different metro tickets, and most people buy them in the automatic ticket machines that can be found in every metro station. Other locations include the TMB information points, kiosks, estancos (tobacconists shops that also sell stamps), and the stands in the streets that sell lottery tickets. The 2-, 3-, 4- or 5-day Hola Barcelona travel card metro tickets can also be bought online. You can buy your Barcelona Card in Barcelona’s Tourist Information Centres or online.

The main difference between the Barcelona Card and Hola Barcelona (also known as Hola BCN!) is that the latter only includes public transport while the Barcelona Card also offers free entry to various museums and places of tourist interest as well as discounts on cultural and leisure visits and some tourist services.

Once you’ve bought your ticket or pass, you need to keep in mind that you will need to insert it when you enter each metro station. If you have bought a pass that allows integrated travel, you can use it on all of Barcelona’s public transport for 1 hour and 15 minutes from the first time you validated your ticket. It will count as one journey, but you still need to validate it on each method of transport that you use (bus, tram, FGC or Renfe).

TICKETS FOR OTHER PUBLIC TRANSPORT

Price of metro tickets in 2019

Although much more reasonably priced than the service in many other the European cities, during the past few years the price of metro tickets has risen significantly. It’s therefore important to buy the right ticket for your journey, and you may find that with the discounts available through the Hola Barcelona travel card (Hola BCN!) or Barcelona Card you could save quite a lot of money.

ZONE 1
The price that is shown on the chart for the single ticket and the passes that begin with “T-“ is for journeys within Zone 1, which serves Barcelona’s city centre.

Barcelona’s Metro has a total of 11 lines that run underground across much of the city. Below we have included a map that shows the different lines, and a chart that shows more information about each line. We should point out that Lines 6, 7 and 8 actually form part of the Ferrocarrils de la Generalitat de Catalunya (FGC), and not of the Metro, but the tickets and transport passes are the same as for the Metro. 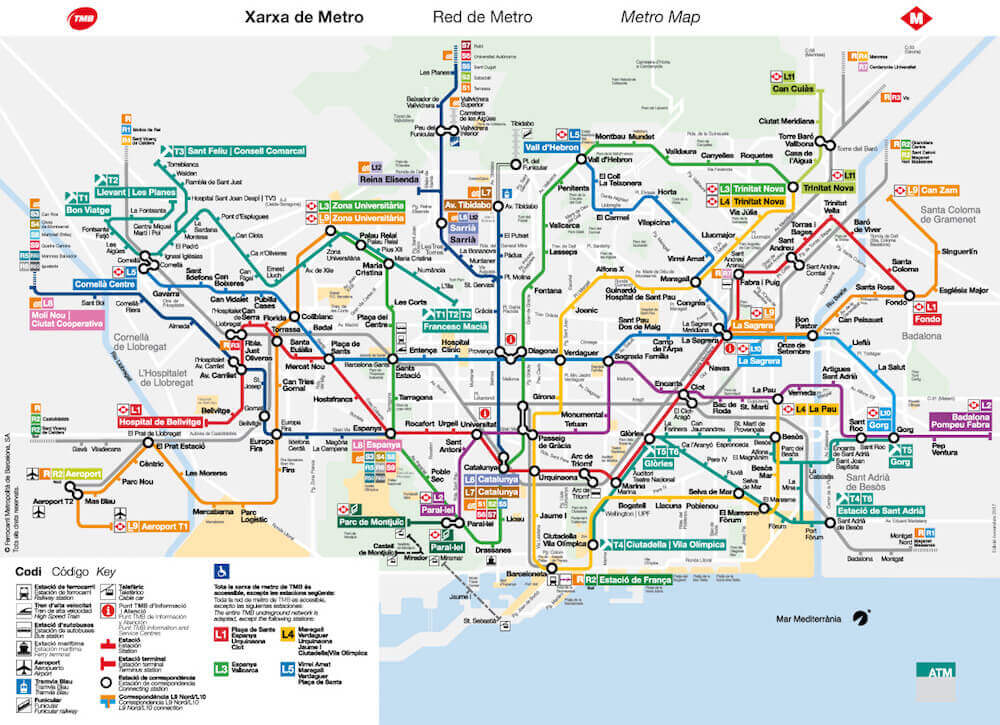 METRO TO AND FROM THE AIRPORT FROM THE CITY

From February 2016, with the extension of Line 9 of Barcelona’s Metro network, it’s now possible to travel by Metro from the city to both of the airport’s terminals. Unfortunately there’s not a direct line from the heart of the city centre to the airport and vice versa, so you’ll need to change lines to get to Plaça Catalunya and other central areas of the city

The standard ticket isn’t valid on the airport service, so you’ll need to buy a special ticket that costs €4.50 per journey.

Barcelona’s metro timetable varies according to the day of the week, with the service being extended over the weekends, so that people can get around easily late at night.

THE FREQUENCY
The frequency varies from line to line, but there will be many more trains at rush hour, and fewer late at night.