Although the day of San Juan, which in Catalan is known as Diada de Sant Joan, is the 24th June, the most well-known and popular part is the Verbena or Night of San Juan, which is held on the night before, from the 23rd to the 24th June. This celebration is deeply rooted both in Barcelona and the rest of Catalonia and Spain. Everything seems to indicate that this celebration, although as is expected with some differences and special characteristics between different towns and that is also important in other European countries, is a Christian adaptation of the ancestral tradition of celebrating the summer solstice or, what is, the shortest night of the year. So, the actual date of the summer solstice, which is usually between the 20th and 22nd of June, is instead celebrated on the night of the 23rd to 24th June, this date is when Saint John the Baptist was born.

History, traditions and activities of Sant Joan in Barcelona

What is a “Verbena” exactly?

In Spain, “Verbena” is understood as any type of festival that is held outdoors and during the evening and where music is the main focus of the festival. That is why at the Verbena de San Juan, the other essential element for its celebration is fire, whether in the form of large bonfires, torches, firecrackers or fireworks. Also, and as often happens in any celebration, food also has a key role in the towns and cities of Spain.

San Joan Bonfire: Origen and Symbology
Origen
The tradition of lighting a bonfire on the night of San Juan, as much a tradition in Barcelona, Catalonia and the rest of Spain, comes from the pagan ritual that tried to give a little extra energy to the sun, as from this moment it starts to lose its strength, making the days shorter and shorter. On the other hand, the sacred texts say that Zachary ordered to light a bonfire to warn the four winds of the birth of his son John, and from there we have the tradition of celebrating San Joan with bonfires today.

Symbols and rituals
The symbols on the use of fire and specifically on the lighting of bonfires is very popular but could be reduced to the belief that fire has cleansing powers. In order to feel renewed, many people, who even today often do so, burn old furniture and objects as well as different clothing. It is also a tradition to jump over the smaller bonfires where the flames are smaller although it is not exactly entirely safe ;).

To understand the importance of the Verbena of San Juan in Barcelona, Catalonia and the rest of Spain on the night of the 23rd June, it is safe to say that it is the second most anticipated night of the year, also being, much more popular and celebrated than the festival of San Juan itself on the 24th June. There are many, different places to celebrate Sant Joan, from homes, to the streets and squares, as well as bars and clubs and the beaches on the coastal towns.

Popular Festivals of Sant Joan
Many towns in the province of Barcelona and the rest of Catalonia organise their own popular festival, where the neighbours join and dine to celebrate the night of San Juan. The same happens in Barcelona, in which several popular parties are often organised in the different areas of the city. In these cases, the organisers of the celebrations are often neighbourhood associations. Especially in the towns, it is also common to enjoy a fireworks show.

San Juan Festival on the Beaches
Another traditional and essential place to celebrate in Barcelona, as in the rest of the coastal towns of Spain, are the beaches, especially for young people. So, before nightfall, the beaches are filled with large or small groups of friends who usually listen to music to liven up the night. They take dinner (sandwiches, bags of crisps, snacks and even in some cases prepared home cooked food as well as soft drinks, beer, wine and cava). To brighten up and give a colourful touch to the evening, they usually place some torches around them and, of course, shoot some firecrackers and fireworks. It is also common for the most daring to enjoy a night time swim in the sea.

San Juan at Home and on Rooftops
Often, families and groups of friends enjoy a lively dinner and after go up to the roof top or go out onto the balcony to let off some firecrackers or fireworks. If this is not possible, they usually go down onto the street to enjoy the festive atmosphere at the nearest popular celebration.

Restaurants, Bars and Clubs
Another way to enjoy the Verbena of San Juan is dining at a restaurant which usually offer a special menu for this unique night. Then, some of these restaurants offer a show and the option to continue enjoying the verbena in the restaurant. If not, you can continue the party until the early hours in some bars and clubs that organise a themed night.

Book the best parties during the Night of Sant Joan 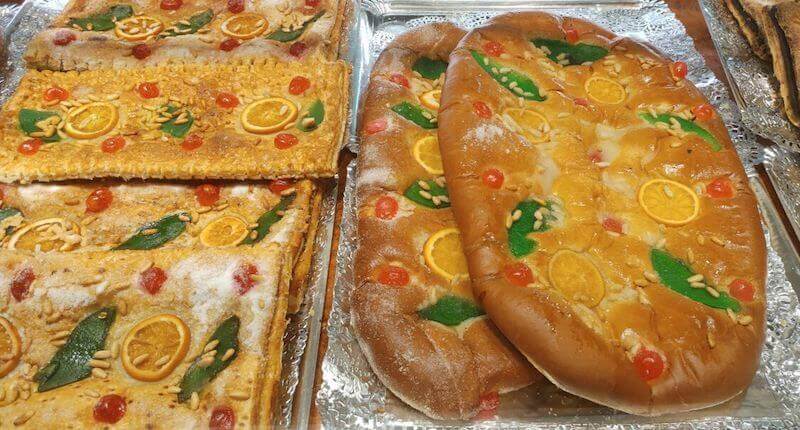 The star dish in Barcelona and Catalonia during the San Juan celebration is the famous Coca de San Juan in Spanish or the Coca de Sant Joan in Catalan. Originally, it was a kind of cake made with eggs and round-shaped, as a clear reference to the sun. Today, and surely by luck, the recipes for the Coca de Sant Joan have evolved and include new ingredients (pine nuts, dried fruit, llardons, optional cream filling, etc.) and its shape is longer, reaching its current traditional form of a length that is usually about twice its width. The coca is eaten during Verbena, the night of the 23rd June, and at lunch on the day of San Juan, the 24th June.

Night of Sant Joan 2020 in Barcelona (and Spain)

The most visually attractive aspects of the Night of San Juan are the fireworks and bonfires. And although it is true that, at least in Barcelona, bonfires were not lit so much during the first decade of the new millennium, fortunately this has been reversed in recent years. So, in the past, the many bonfires that illuminated almost all the streets and squares of Barcelona with their fire and in an almost improvised way, have increased again, although it is much more controlled and safer, with the necessary permits.

Verbena en La Barceloneta Pasacalles, Hoguera y Fuegos pl. Poeta Boscà, 1 23rd June from 20:30 to 23:30€ free + info
Revetllassu de Sant Joan Concert, bonfire and dinner The Arc de Triomf 23rd June from 20:00 to 01:00€ free + info
Verbena at Mirabé Dinner, entertainment and dancing c/ Manuel Arnús, 2 23rd June to be confirmed€ (+34) 93 418 58 80 + info
Fire Party Parades, activities and DJ’s Rambla del Raval, s/n 23rd June from 19:30 to 01:00€ free + info
Verbena at Montbau Parades, dancing and DJ’s pla Montbau, 1 23rd June from 20:00 to 03:00€ free + info
Verbena Plaça del Sol Dancing with the Celesta Orchestra pl. del Sol 23rd June from 21:00 to 03:00€ free + info
Opening times of museums and shops on San Juan (24th June)
Shops
24th June, the day of San Juan, is a public holiday in Barcelona and the rest of Spain. So, the opening hours are often similar to those on a Sunday or public holiday, with shops being closed in the vast majority of the areas in Barcelona. If you want to do some shopping, you can go to the Maremagnum shopping centre, located in Barcelona’s Port Vell, which is open all day. On the day before, 23rd June, it is worth noting that although shops and businesses open normally, it is possible that in some cases they close earlier so that workers can get ready to enjoy the verbena.