Columns of the Temple of Augustus

Nobody would argue with the fact that Barcelona has a wealth of hidden gems of historical and cultural interest. Examples of this are the Columns of the Augustus Temple (Les Columnes del Temple d’August), which are over 2000 years old and still stand strong in the heart of the city, specifically inside a medieval mansion in the Gothic Quarter that is now the headquarters of the Centre Excursionista de Catalunya. Although whilst strolling through the narrow medieval streets of this area you might think it improbable that it could be a home to such large Roman columns, 10 metres in length, you only have to go to Number 10, Carrer Paradís (‘Paradise Street’ in English) to see them for yourself.

The Columns of the Temple of Augustus is one of the MUHBA’s (Barcelona City History Museum) sites, and entry is completely free. Before entering the Medieval building in which the columns can be found, we recommend you discover the architecture of the building from the outside, which is of Renaissance style, and you can read more information about it on a plaque which is situated on the wall to the right. You should then continue to the bottom and turn right, where down a small set stairs you’ll be treated to the stunning image of the four Roman columns, beautifully preserved in such a small space. 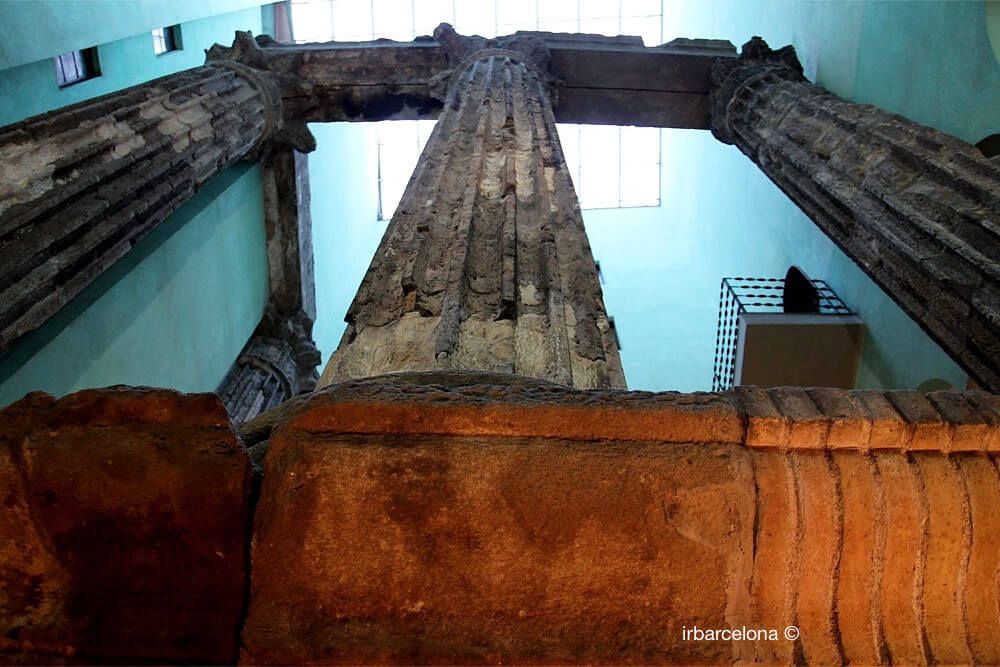 On the floor of the entrance to the building where the four columns are situated is a millstone that indicates that at the time, this was the highest point of ‘Mont Tàber’ or Taber Hill. 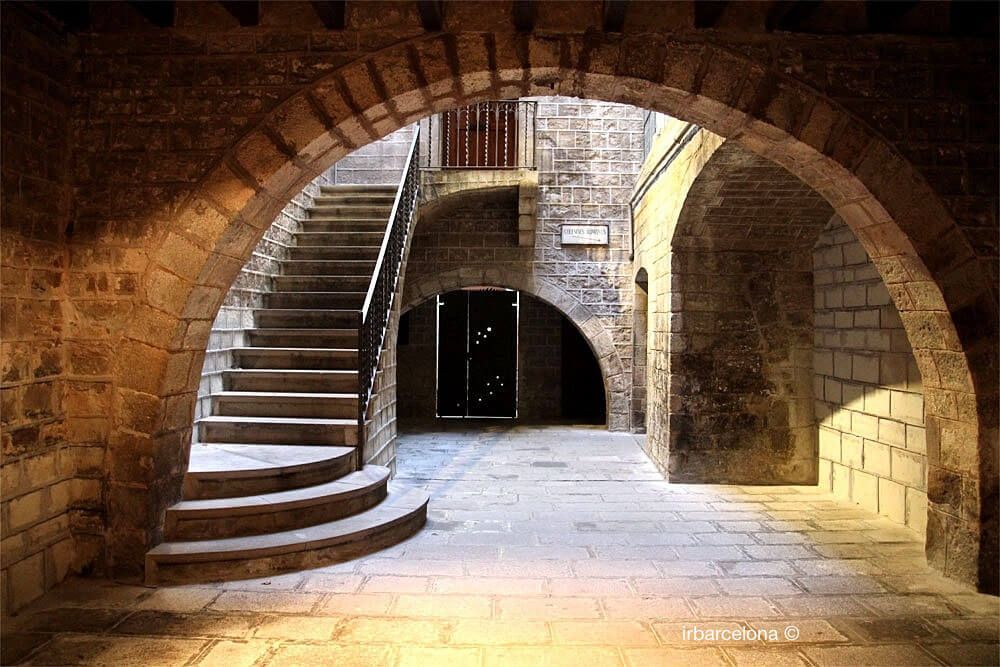 You can sit on the stone bench to admire in detail each of the columns, as well as reading about their history thanks to the information panels that are situated nearby. If you’re planning on taking photos, we should warn you that it could be quite tricky, since the space is so small. We recommend taking professional equipment, including a wide angled o fisheye lens, in order to get the best results.

After the visit, if you’d like to delve a little deeper into the history of Barcelona in Roman times, we recommend visiting the headquarters of Barcelona’s History Museum (MUHBA), which is just down the road in the Plaça del Rei. Among other things, you’ll be able to look at some of the old streets of the ancient city, which can be found under the surface of Barcelona as it is seen today.

History and origin of the Columns of the Temple of Augustus

The four columns that you can see are the only remains of the former Temple of Augustus. Built at the end of the 1st century AD in honour of the Emperor Augustus, the temple towered over the ancient Roman city of Barcino, and at an impressive 16.9 metres in height, it was located at the top of Mont Tàber (Taber Hill). Over the centuries, almost all of the stones from the Roman forum were taken down and re-used for other buildings, but a few remained in their original place, whether they were re-used or remained intact, merging with the surroundings of new buildings that were constructed over time. And this is what happened with three of the columns of the Temple of Augustus, which originally formed part of the inside of a building. In the 15th century this fact was discovered, and it caused great discussion as to the origin of the columns. Despite this, it was not until the 19th century when it was found that they were remains of an actual Roman temple. 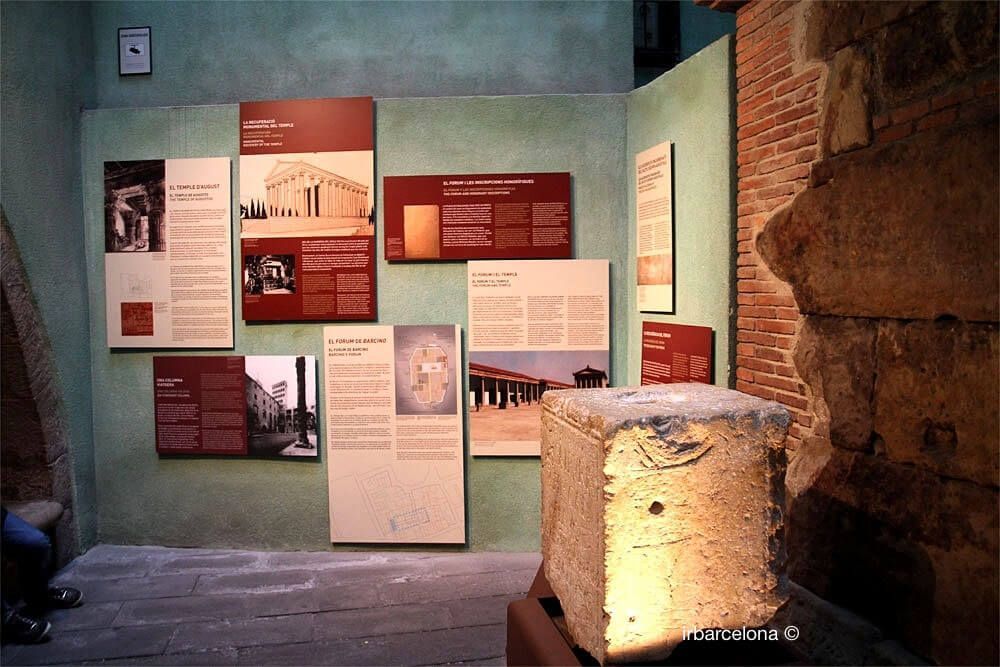 The fourth column, which was formed from many of the remains of the building that collapsed in the mid-19th century, was erected in the Plaça del Rei in 1879, where it remained until the mid-20th century when it was moved to its current location along with the temple’s other three columns, which are still in their original location from over 2000 years ago. 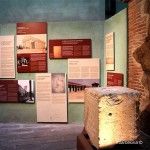 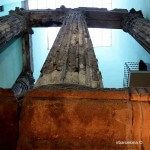 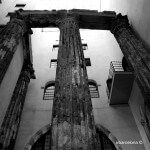 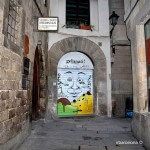 Map and How to get there

In spite of being right in the heart of the city centre, because you’ll have to walk through some of the narrow medieval streets of Barcelona’s Gothic Quarter it’s possible that you’ll get a little lost if you’re not completely sure of where to find the columns. We have therefore provided you with a map of the area, in which we’ve marked the Columns of the Temple of Augustus, and how to get there from two of the best known and nearby points of the city, the Plaça Sant Jaume and the Cathedral.

Access to the building and the columns is free of charge.

By foot: in spite of being a little hidden and hard to find, it’s very central and you can walk to the Columns from anywhere in the city centre, making the most of a lovely walk through the oldest streets of Barcelona.