In order to express their gratitude to Joan Antoni Samaranch for all the work he did throughout his presidency of the International Olympic Committee to ensure that Barcelona was the city chosen to host the 1992 Olympic Games, the City has added his name to its recently created Joan Antoni Samaranch Olympics and Sport Museum. As you would expect, the museum, which is run by the ‘Fundació Barcelona Olímpica’, can be found just a few metres away from the Olympic Stadium, the place in which the Olympic dream was made a reality in Barcelona on 25th July 1992.

If you’re sports fanatics, don’t miss out on the opportunity to visit the Olympic Museum, which is the perfect place in which to find out more about the history, origins and evolution of the Olympics, a highlight being the information about the different Olympic disciplines, all of which is displayed in the most interactive way possible, with all sorts of audio-visual and multimedia elements. 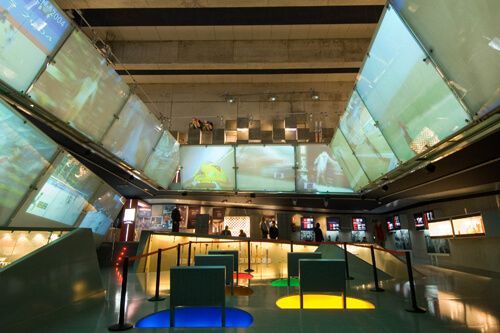 One of the highlights of the Olympics and Sport Museum is the area that displays the collection of Joan Antoni Samaranch (President of the IOC, the International Olympic Committee, from 1980 to 2001). Exhibiting various items connected with sport, art and culture, the intention is to transmit the true values of the Olympic spirit.

There’s also a permanent exhibition that focuses on the cities that have hosted previous Olympic Games, as well as on the Olympiads that took place in each of them, with special attention being paid to the Barcelona Olympic Games.

Amongst the various displays within the Joan Antoni Samaranch Olympics and Sport Museum, visitors’ attention is drawn particularly to the simulators that allow them to compete in different virtual Olympic sports against some of the world’s greatest athletes of all times. One example of this is the speed simulator, in which you can take part in a race against the legendary Carl Lewis.

Other discounts: for groups of 10 or more people.

Free of charge: children under the age of 7, senior citizens over the age of 65. Free entry for everyone on the International Museum Day (18th may), Santa Eulàlia Fest (on 12th February) and La Mercè Fest (on 24th September).

Montjuïc Funicular: from the Paral·lel metro stop (Lines 2 and 3).

On foot: You can walk there if you are in or around the Poble Sec district.