The work of Joan Miró, painter, sculptor, engraver and ceramist born in Barcelona in 1893, is considered one of the greatest examples of surrealism. The Fundació Joan Miró (Joan Miró Foundation) is a space that is dedicated to his knowledge and dissemination, as well as to the promotion of modern art.

The origins of the Foundation Joan Miró

The origins of the foundation go back to the great success that Joan Miró had in the city with his first major exhibition in 1968. From then on, the authorities at the time began working on the idea of creating a permanent space in Barcelona which would house a huge amount of the artist’s works, and this came to fruition in 1975, with the opening of the Fundació Joan Miró.

Situated in the hill of Montjuïc, the building that houses the foundation is the work of the architect Josep Lluís Sert. It had to be extended and slightly re-designed in 1988 in order to better accommodate the large number of Joan Miró’s works. Another excellent option which includes entry to the Miró Foundation and to other major museums and places of tourist interest, as well as public transport is the Barcelona Card. 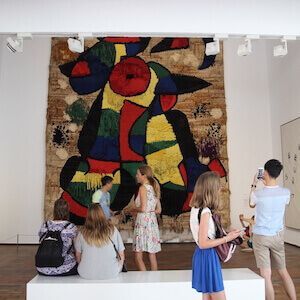 The vast majority of the works in the Fundació Joan Miró were donated by the artist himself, whereas others were donated by people close to him, for example by his wife Pilar Juncosa or by his friend Joan Prats, amongst many others. It’s thanks to all these contributions that the collection now has over 14,000 of the artist’s works, comprising 200 paintings, almost 200 sculptures and over 8000 drawings.

In addition to the permanent collection, there are always one or more temporary exhibitions, which serve to show new trends in art, as well as showcasing great artists of the past. The Foundation never forgets the series of objectives which is geared towards promoting the work of Joan Miró at all levels. A good example of this is the ‘Joan Miró itinerary’ – you will be guided through a route of Miró’s works, with the help of an expert guide if you wish.

General admission: €13, to include permanent collection and the temporary exhibition

Concessions: €7 for students, people over 65 Years Old and groups of adults. The Foundation is a member of ‘Articket BCN’.

Free entry: children under 15 years old and the unemployed