Located in the Poblenou district, this cemetery was set up in 1775, in order to ease pressure on the already full parish cemeteries in Barcelona. However, the current cemetery that you see today only dates to 1819, as the original one was destroyed by Napoleon Bonaparte’s troops.

There have been various extensions due to the significant growth of the city’s population, the first of which took place in 1849, and this corresponds to the current second section of the cemetery. This was a very important reform, because it gave rise to the space that now houses the monumental tombs, which are mainly neoclassical in style but also with modernist influences. These tombs belonged to notable families of the time, in the majority of cases well-known businessmen and successful industrialists of the late 19th and early 20th centuries.

However, not all the most interesting graves of this cemetery are in this second section. We recommend paying a visit to the sculpture known as ‘The Kiss of Death’ by Jaume Bartra in the first section. Other highlights of the cemetery include the central monument that is dedicated to those killed by the yellow fever epidemic in 1821, and the tomb of ‘El Santet’, belonging to a young man of humble origin from the Poblenou district, to whom miracles are often attributed, but who died in 1899 at the age of just 22. Over a hundred years after his death, his tomb is still venerated, and is always decorated with fresh flowers and plants.

Every fortnight, free guided tours are given in Spanish and Catalan, that delve a little deeper into the main points of interest in the cemetery. In addition, and to complement these tours, there is a night visit twice a year.

Tour of the Poblenou Cemetery

What you will see on the visit: The tour lasts an hour and a half, during which time you’ll see 29 of the most interesting graves, which are seen as highlights either because they belong to a well-known or important person or because they were designed by one of the great architects of the time. In the majority of cases, these two come hand in hand. Advance booking is not required for these visits, unless you will be coming with a group of 10 or more.
Duration: 1½ hours

What the vistin includes: Carried out by candlelight to show the way, with atmospheric music played in the background, the cemetery of Poblenou is recreated by some of its characters from the end of the 19th century and the beginning of the 20th. Few people are aware of these tours, but you certainly won’t leave disappointed. It’s essential to contact the cemetery in advance in order to book onto this guided tour.
Duration: 1½ hours

Information and reserve a place

For more information, and to reserve a place on the night-time tours, you should contact the ‘Cementiris de Barcelona’ organisation:

Visits at your leisure

If you’re not able to attend the tours for whatever reason, you can of course have a wander round the cemetery independently, at your leisure. At the entrance, where you cross the gates to access the cemetery, you’ll find leaflets in Catalan, Spanish and English, telling you more information about the most interesting graves, and they also contain maps.

If you have a smartphone and a QR-code reader application, you will be able to scan the QR codes at the entrance, in order to find out even more about the Poblenou cemetery. In addition to the languages on the leaflets, QR codes also include information in French.

Don’t forget that as well as being an interesting location to learn about characters from Barcelona’s history, the cemetery is also the resting place for loved ones of the current residents of the city. Please bear this in mind as you walk round the cemetery. 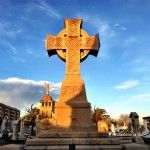 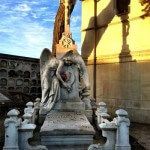 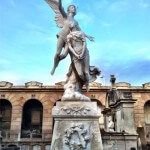 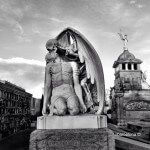 Access to the cemetery, including the guided tours, is free of charge.

By foot: Situated within walking distance from La Rambla de Poblenou, you can arrive on foot if you’re in the area.