La Festa Major de Gràcia, also known as Festes de Gràcia (in Catalan) or Fiestas de Gràcia (in Spanish), is the most important event of the year in the Gràcia district, and one of the most anticipated by Gràcia’s residents, as well as by those living outside of Gràcia. While it’s true that the main lure and focus of this festival are the participating streets and squares in the competition for the best decorated, there are many other activities that take place over the seven day festival that attracts thousands of people each year.

Origin, history and evolution of the Gràcia Festival

The origin of the Gràcia Festival began in 1817, or at least this was when the first written evidence of the celebration is dated to. Initially it was celebrated to coincide with the Sant Isidre festival, on the 15th May, as Sant Isidre was the patron saint of agriculture and when Gràcia was just a small village called Villa de Gràcia whose residents primarily worked in agriculture. Years later and with a significant population rise and gradual shift in the type of work to labourers, craftsmen and small merchants, the dates of the festival changed. So, for many years now the festivities have started on 15th August and last for a week.

All about the Gràcia Festival

As in any great festival, the Gràcia Festival aims to keep everyone entertained. You often see children playing games, families enjoying a morning or evening stroll through the decorated streets and squares with their children, teenagers enjoying one of the open air concerts as well as the elderly dancing to an orchestra, playing bingo, engrossed in an intense game of card or dominoes, or simply sitting down whilst soaking up the great atmosphere whilst being entertained by the people passing by.

Main activities at the Gràcia Festival

As we mentioned before, the decorated streets bring so much colour to the festival and attracts many visitors, both residents from the other areas of Barcelona as well as tourists who are drawn to the increasingly popular festival. But I encourage you to not only stick to seeing the decorated streets, but to also take a look at the official programme. Here is a list of some of the regular activities that are on every year at the Gràcia Festival.

After wandering through the different decorated squares and streets, don’t forget to vote for your favourite. You can also vote via the official Gràcia Festival App.

As is also the case in La Mercè festival, the main festival of Barcelona, and other important neighbourhood festivals such as Sants Festival or La Barceloneta Festival, one the of most anticipated events for the fans of the Gràcia Festival takes place well before the festival actually starts. This is the official presentation of the festival’s poster, which is different each year and a jury decides between the different proposals by various artists in a competition. 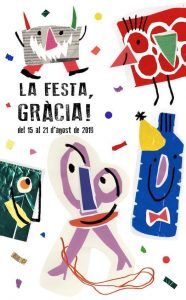 Festa Major de Gràcia 2020 details
Begins: 15th August 2020.
Ends: 21st August 2020.
Where: Quarter of Gràcia.
Number of decorated streets and squares: To be confirmed.
Program 2020: Check it out at official website (in catalan).

The second most anticipated moment and which sometimes takes place when the poster is presented, is when they present the official events and activities programme. The programme also includes a map of the Gràcia area with all the participating streets and squares for the competition.

Are the activities open to everyone?

Although the Gràcia area was an independent village for many years and many of the residents still have a great sense of pride for their area, everyone can participate in the organised activities. However, there are some activities that are just for the residents. For example, the dinners for the festival committees that every street and square participating in the festival has, is reserved exclusively for the commission members and the residents of each street and square.

Each street and square that participates in the competition for the best decorated has to decide a few months beforehand which theme they will choose to decorate the street in. A few months before the festival, the festival committee for each street and square starts to have their first meetings in order to start to work out how they will put up the decorations. All of this is done in top secret in order to avoid giving any ideas away to the other participating streets and squares and to have a bigger impact when they finally decorate a few days before the 15th August when the festival officially starts.

Map of the streets and squares at the Gràcia Festival 2020

On this map you will find the decorated streets and squares highlighted, as well as other places in the area where the most popular activities will be taking place this year.

Download the detailed map of the Festa Major de Gràcia 2020 here. (To be confirmed).