Barcelona’s França Station or Barcelona’s Francia Station, also known by its official name in Catalan, Estació de França, is located next to Ciutadella Park, which we could call the “border” between the neighbourhoods of La Barceloneta, La Ribera – Born and La Villa Olímpica del Poblenou. Despite the fact that, as is normal, Barcelona has several train stations, Francia Station can be considered the most iconic of them all and, at least for us, also the one with the greatest charm.

All about Barcelona’s Francia Station

The original construction of the station dates from 1854 but both the current lobby and its infrastructure were designed between 1926 and 1929. Today, it is still used as a train station, although it is true that with the construction of other stations, such as Sants and La Sagrera, it has lost the importance and relevance it once had. Moreover, for some time there has been talk of a more than possible closure of the Francia Station in order to be renovated and to give it a new use for the city.

Why is it known as Francia Station?

Although the first construction of the station was baptised with the name of “Barcelona 2” (as it was the second station of the city after the Barcelona-Mataró line) and that the new station that replaced it received the official name of “Barcelona Término“, it was always popularly known as Francia Station or França Station. And the final destination of several trains leaving from the station was, precisely, France (Francia in Spanish). Finally, after an extensive renovation carried out from 1988 with the aim of structuring and improving its appearance for the 1992 Olympic Games, the station adopted the official name of Estación de Francia (in Catalan, Estació de França).

The current França Station in Barcelona was opened in 1929. It was designed by two companies; “Sociedad Material para Ferrocarriles y Construcciones” and “Maquinista Terrestre y Marítima” (the warehouse designed to house the railway tracks) as well as by the engineer Andreu Muntaner and by the architects Pedro Muguruza, Pelayo Martínez and Raimundo Durán Reynals (the noucentista style building where the lobby is located) with the aim of holding the International Exposition in Barcelona in the same year. This replaced the already obsolete building which, since 1854, functioned as a train station on the same site. Like so many large structures of that time (other train stations, markets, monuments, etc.) much of the material used for construction was wrought iron, in great symbiosis with glass. It should be noted that, at least in terms of its external appearance, it bears some similarities to the old and famous Orsay railway station in Paris, now the site of the famous Musée d’Orsay.

In recent years, the number of train lines to and from França Station has decreased considerably, limited to a few regional and medium-distance trains. And although it is true that currently Sants train station is the main station for journeys from Barcelona to France, for the more romantic it is still possible to travel from Barcelona’s France Station, although a change of train must be made along the way.

Given its beauty, both the lobby and the large hall that provides shelter to the tracks, platforms and trains that arrive and depart, France Railway Station is the setting for some specific events. These include a number of fairs, exhibitions and flea markets which tend to attract a large number of people. 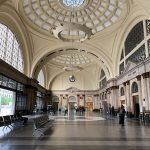 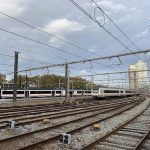 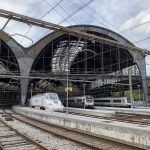 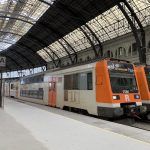 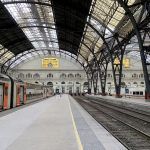 Map and how to get to the Francia Station

If you need to depart from França Station, you can book a taxi online to pick you up at your home, hotel or wherever you need and take you directly to the station. If you arrive at França Station by train, the best option to reach your final destination in Barcelona is to get a taxi at the taxi rank next to the station. If, on the other hand, you want to get to the train station in your own car, we recommend that you book an online car park nearby where you can park your car.

Ticket sales at the ticket office

Taxi: info and online booking above.

By foot: Located in a unique place, almost on the border between three neighbourhoods in Barcelona (Villa Olímpica, La Ribera-Born and La Barceloneta) makes it possible to easily get there by foot from the nearest points of these neighbourhoods.