Over the years, Primavera Sound Festival (The Spring Sound Festival), which was conceived as an alternative indie music festival, has most definitely become the most important and anticipated musical event of the year in Barcelona and, as a result, a huge mass event. It features some of the best bands and artists of the moment as well as “old” glories, especially indy, rock and electronic music. So, year after year and thanks to a diverse, high quality and attractive line-up, where there is also no shortage of big stars from the international music scene, the reputation of Primavera Sound Barcelona has become known worldwide, for years placing itself among one of the best music festivals in Europe and the rest of the world.

Origins and evolution of Primavera Sound

The 8,000 people who participated in the first festival, which was held in 2001 and which took place in Poble Espanyol in Barcelona, made the music festival a complete success. The second festival held a year later had an important sponsor, Estrella Damm, which allowed it to increase the quantity and quality of its line-up, in addition to having one of the most important indie rock groups at the time attend, Pulp. Over the following years, Primavera Sound grew significantly, both in the number of attendees and in the number and importance of the bands, with great bands such as Belle and Sebastian, Sonic Youth, The White Stripes, Pixies, PJ Harvey, Franz Ferdinand, The Human league, etc. So, in 2006, Primavera Sound was forced to look for a new location with a bigger capacity, Parc del Fòrum, which allowed the festival to continue growing and reach the approximately 200,000 attendees of the last years. In recent years, the festival has grown in such a way and is so well known that it is even possible to simply refer to it as “El Primavera” (Spring).

All information on Primavera Sound Festival 2020

In 2020, Primavera Sound will take place from 1st 7th June, although a few weeks before a series of free concerts are organised under the name of Aperitius del Primavera (in English, The Spring Appetizers), which help to warm up the atmosphere before the start of the festival itself. The main days of Primavera Sound are from Thursday 4th June to Saturday 6th June, while during the other days (1st, 2nd, 3rd and 7th June), there is a series of free concerts included in what is known as Primavera a la Ciutat (Primavera in the City).

There is such a high anticipation for Primavera Sound that a few days after the festival finishes it is already possible to buy the single-day tickets and the 3-day passes at a special price for the next year. The price of tickets and passes for the festival increases as the months go on, to reach a final, fixed price a few weeks before the festival starts. It is so popular that, despite the fact that the festival line-up is unknown at first, many people buy tickets for a day or a 3-day pass, given the guarantees usually offered by the line-up of past Primavera Sound festivals.

Since 2016, Primavera Sound has offered the chance to follow the festival’s concerts on live streaming, and for free, through one of its official channels. For those who, for whatever reason (too high ticket prices, unable to be in Barcelona during the festival dates or because they do not live in the city), this is a useful option to enjoy the festival’s live performances while soaking up the spirit that reigns throughout Primavera Sound.

1. Where does Primavera Sound take place? The stages

The Primavera Sound Festival is not only concentrated in the Fòrum area, where both the main stage (Parc del Fòrum) and the different stages of Primavera Bits (Fòrum beach) are located, but also expands to different stages in Barcelona (and even Madrid). And it does so, included in the so-called Aperitius del Primavera (Spring Appetizers), with a series of free concerts scheduled in different concert halls in Barcelona and Madrid a few days before the start of Primavera Sound. 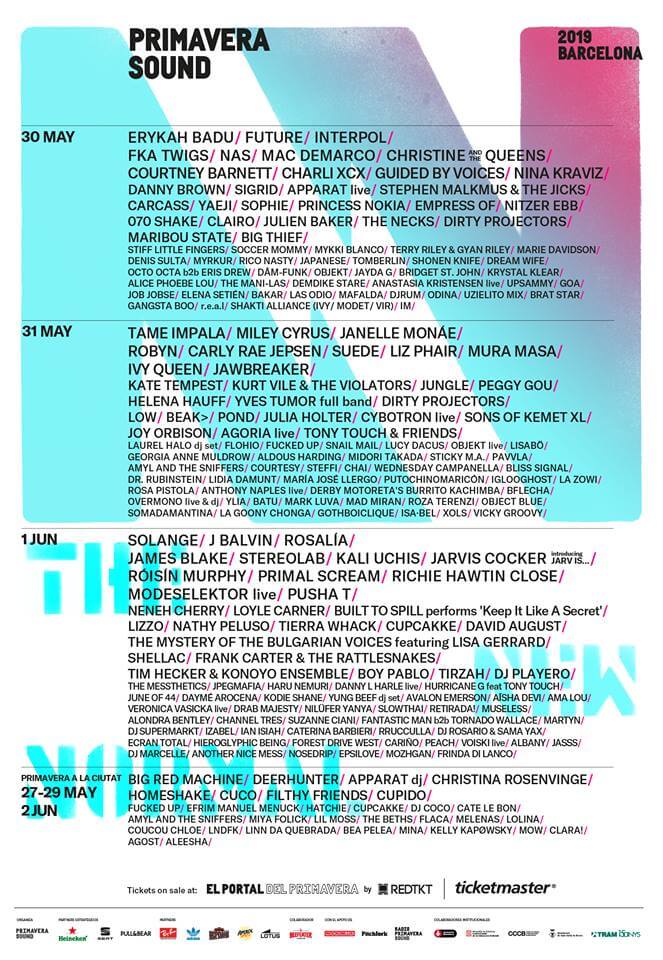 As regulars of Primavera Sound already know and those who aren’t can probably imagine, throughout the Primavera Sound site there are several food stalls and many food trucks where you can keep your hunger and, of course thirst, at bay between concerts. This allows you to get a little break and recharge in order to manage the large number of concerts scheduled.

Buy all kinds of Merchandising

During Primavera Sound, it is possible to buy all kinds of merchandising products, both from the festival itself and from the bands and artists who perform. The different points of sale are spread out over the large area of Parc del Fòrum.

3. Accommodation in Barcelona during the Primavera Sound

If you are not from Barcelona and come to the city to specifically attend the Primavera Sound concerts or you simply take advantage of your trip to Barcelona to attend one of the festival’s concerts, you will definitely need accommodation that allows you to enjoy the festival. For this, a good option is to book a hotel or apartment in the vicinity of Parc del Fòrum, where the main concerts of Primavera Sound are held. This way, it will be very easy for you to get from your accommodation to the Primavera stages and, above all, to get back to your accommodation well into the night when the concerts end.

4. Map and how to get to the Primavera Sound

By car or motorcycle