Just a few metres from the Passeig de Gràcia and a relatively short distance from two of the most well known works of Catalan modernism, the Casa Milà and the Casa Batlló, both by Antoni Gaudí, you’ll find the Casa Comalat. For many people it still remains an unknown work in the city’s modernist landscape, in spite of being one of the buildings included in the Ruta del Modernisme.

Built between 1906 and 1911, the Casa Comalat was commissioned by Mr. Comalat, a renowned moneylender at the time, who, just like much of the rest of the bourgeoisie, wanted his home to be a true reflection of his economic power. The man commissioned to carry out the project was Salvador Valeri i Pupurull, a modernist architect who was greatly influenced by Gaudí’s work. 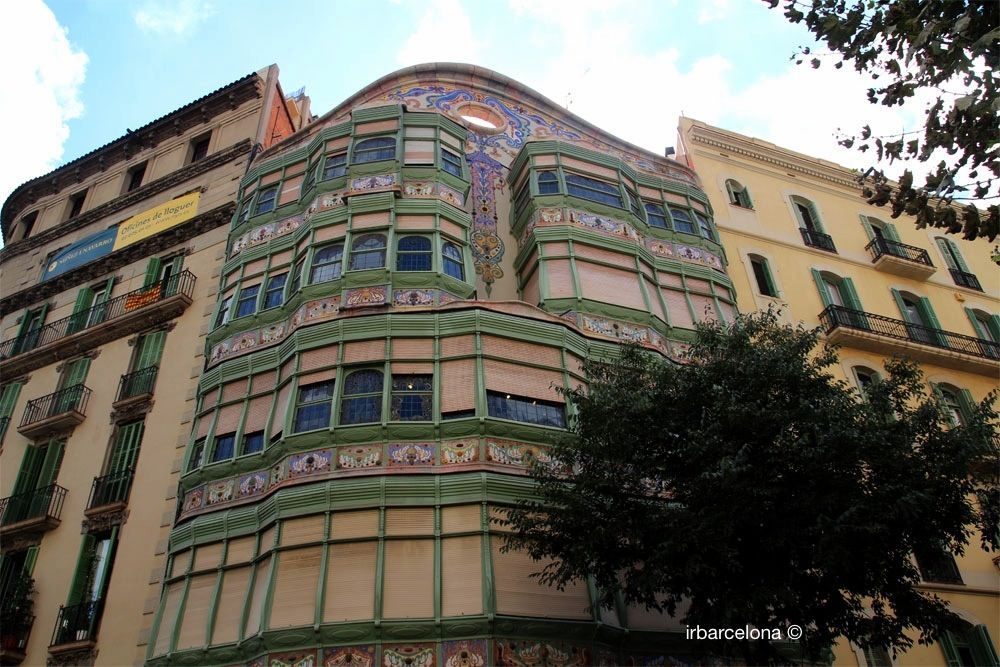 One of the most striking characteristics of the Casa Comalat is that, because it is located on a very small block it has two façades. Although both share the same architectural style, late modernism, the differences between the two are quite noticeable. In the façade looking over the Avinguda Diagonal, which is completely made of stone, you can see the curved lines and decorative details that are typical of modernism, such as the use of organic forms and the presence of large balconies, but in spite of this it has a sobriety that differentiates it from the rear façade on Carrer Còrsega. This façade, in which the use of curved forms is more pronounced, is much more striking and colourful, mainly due to the widespread presence of polychrome ceramics and its striking green blinds that cover the wooden galleries.

Casa Comalat reminds many people of Antoni Gaudí’s work, because many of its elements bear a strong resemblance to those of the genius architect, an example being the harlequin sombrero that is made of green glazed ceramic, that crowns the Casa Comalat and that looks a lot like the scales of the dragon at the top of the Casa Batlló. 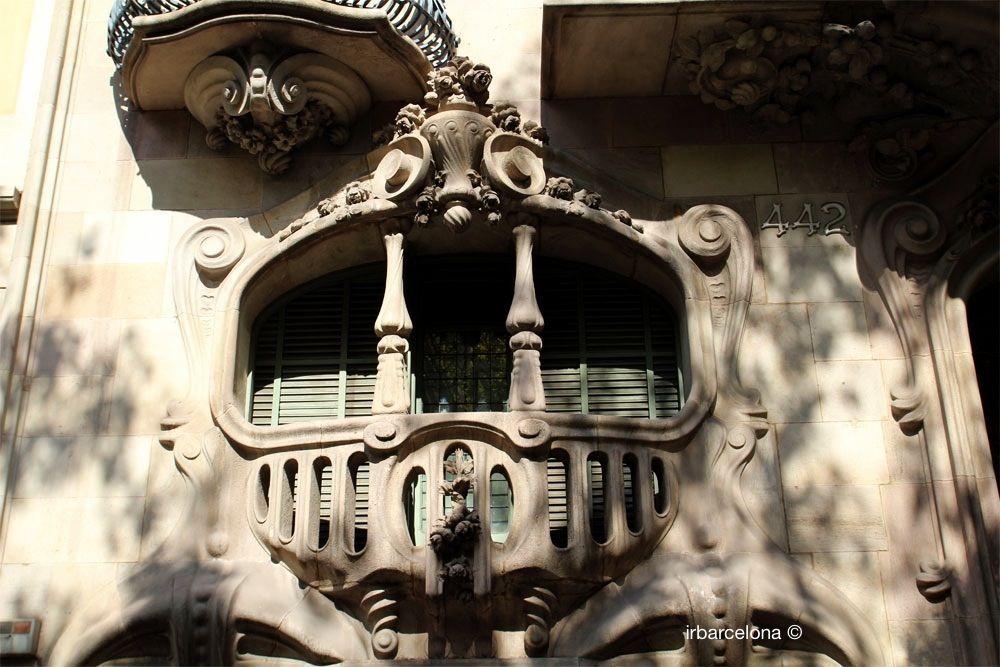 Apart from the refurbishment that was carried out on the façade on Carrer Còrsega in 2009, that ensured its return to its former glory, the Casa Comalat is one of the modernist buildings that has undergone the fewest modifications and alterations, either on its façade or its interior, so we can say with some confidence that it has changed very little since its construction over 100 years ago.

In order to see the beauty of the multi-coloured ceramics that decorate the façade on Carrer Còrsega, we recommend that wherever possible, you pass the Casa Comalat on a sunny day between around 11:00 and early afternoon, as it shines in all its splendour at this point.

If the exterior of the building makes us think about Gaudí’s work, the same doesn’t happen with the interior. In it the modernist spirit can clearly be felt, but to such an extreme that sometimes it appears to have baroque elements, something that’s quite unlike other modernist buildings, which in spite of having an interior décor featuring these kinds of details, aren’t as numerous or as extreme.

IT’S NOT POSSIBLE TO GO INSIDE

As it’s still a private residence it’s not possible to go inside, which is a real shame because it is in a perfect condition and it’s at the top of the marvellous rear façade. 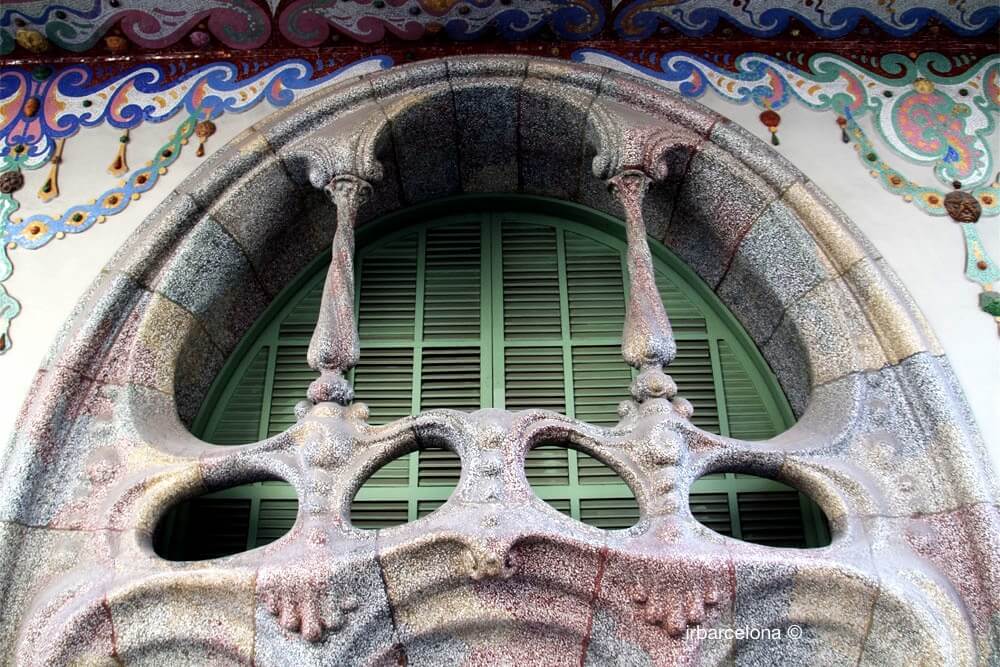 Inside, a highlight is the constant use of ceramics in the walls and ceilings, both in the communal areas and the private rooms. You can also see a large number of silk-screen prints, relief ceilings and wonderful stained glass windows, made by Rigalt i Granell, one of the major glass makers of the time.

Wood is also used throughout the Casa Comalat, specifically in the hallway, where as well as using wood for various ornamental details, you will also see a wooden bench, a true jewel from the beginning of the 19th century and the only one of its style that you will see nowadays in a modernist building. 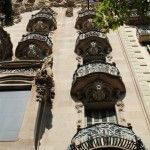 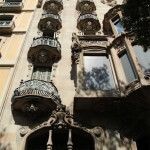 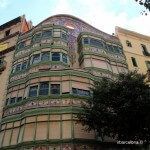 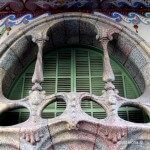 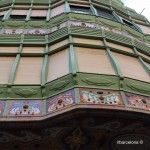 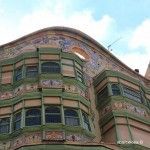 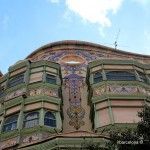 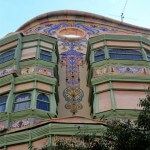 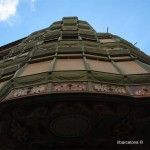 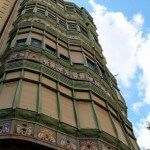 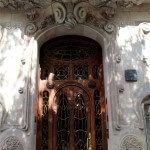 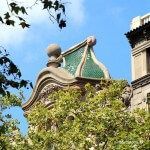 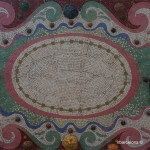 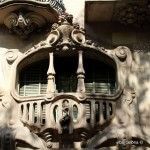 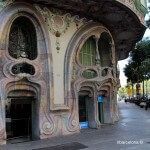 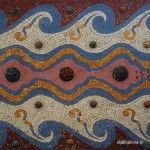 As it’s privately owned, it’s not possible to visit the inside of the Casa Comalat.

On foot: You can enjoy a walk up the Passeig de Gràcia to the Casa Comalat.